A tarantula that sits on your knee but never does bite you.
A viper that has slithered up your shirt sleeve but never strikes.
Saying something conspicuously embarrassing in front of group of people but they never turn to gawk nor give the slightest laugh at your expense.
Standing on the edge of a cliff, now walking, now dancing, but never teetering nor toppling over the edge.
$1 in your savings account but despite your spending, that dollar never runs out. 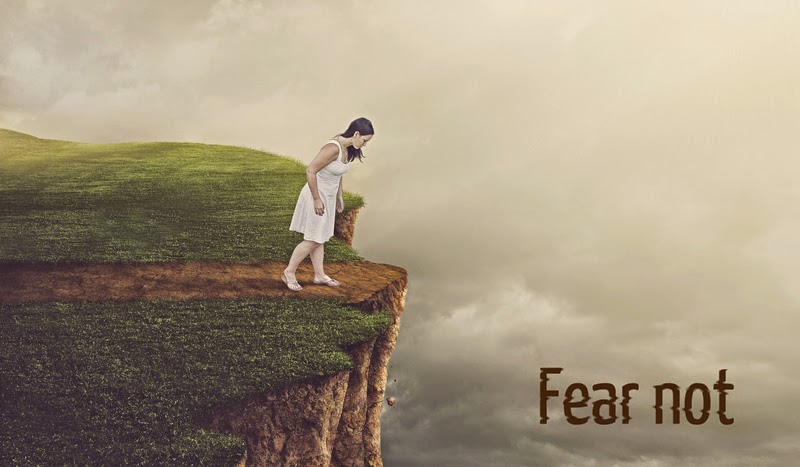 That's where we will end up. Such paradoxical illustrations will reappear at the finish line as I seek to unwind what is an explicitly biblical mystery of how a true Christian both simultaneously fears and loves God. And how it changes them...

The Problem: Either fear or love of God likely bothers you, even if just a little (& certainly trying to both at the same time!).


But these two crazy kids belong together. The Bible almost inexplicably weds the two ideas and more often than the appearance of the occasional proof text (see 1 John 4:18 above) used to prove the other side wrong. Consider the following appetizers:
The Game Plan. How might we arrive at such an awestruck & lovestumped kind of life? It is upon this question I've been reflecting considerably. First, we need to reevaluate what fear is and what fear does. Second, armed with what fear does to us, we will learn how fear and love are wed such that the fear of God becomes functional and life-giving (unlike every other fear which is offers no return on time & energy invested & is utterly debilitating) Third, we'll delve into how such a fear changes how we relate to God and the world around us. It also turns out that God has been teaching me so much on this these past couple weeks or so that this will be Part One of a Two-part effort. 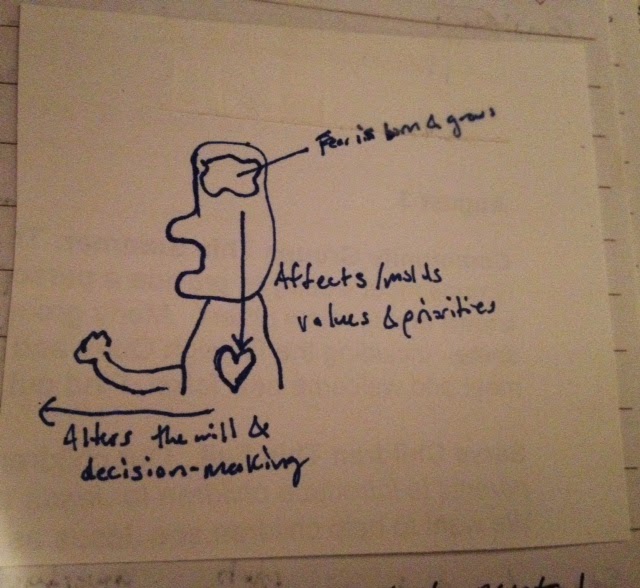 1. What fear is and what fear does. I would define fear as a deep-seated emotion toward some potential harm, the growing thoughts of which causes a person to remain distant, protect, or run. Fear is not inherently evil but neutral because the potential harm is, in fact, real. However, the fears that cause us to remain distant, protect ourselves at every corner and run, turn negative when we've fed such fear with more and more of our thoughts such that it has grown inordinately large. Hence, what fear does. Fear consumes thoughts. Anxiety, worry, fears become inordinately large because we think on them. We imagine the possibilities of life ruined by them, we mull over our past hurts related to it, we consider a news item, a doctor's warning, or anecdote your friend told you and begin to think of the consequences should the potential harm become actual. Fear feeds on our thoughts. Such that whatever potential harm we think on most, that becomes our largest (or fattest) fear. And Fear never stops eating on it's own. In fact, it goes on to consume our priorities & values (heart) and then finally eats out to our will & actions (behavior) [see horribly-rendered drawing above].

You can see how this begins to relate us to God. He has made us to function with fear (we are not just wonderfully made, made to fill full with wonder, but fearfully also, made to fill full with fear - Psalm 139:14). We want Him to become largest in our minds, our all-consuming love that we sing about, teach about, tell our lost friends about, write Facebook posts about, and influences every thought and action. So combining God and fear would be great because Fear never stops eating on its own - grows in our minds, down toward our hearts & outward through our actions. Except that fear always thinks on potential harm and fear, as we normally experience it, would cause us avoid, protect, run. Not to mention the Bible affirms God is the greatest potential harm and destructive threat we will ever encounter. Jesus told us bluntly: "And do not fear those who can kill the body but cannot kill the soul. Rather fear Him who can destroy both body and soul in hell" (Matthew 10:28).

2. How is the fear of God different from every other fear? How does God get larger in our minds without simultaneously avoiding Him altogether in fear or living ever-cautiously like He is ready to bring down the hammer with any false move on our part? How can God consume our thoughts with His largeness without also putting aside His tender, humble and secure love? What I am going to share is nothing more than the gospel. However, it's the gospel with an edge. Those who sit under my preaching have heard me say frequently: The greatest gift of the gospel is God. Through trust in Jesus Christ, you are reconciled to the Father who created you. You get God! But it's not a God who has thrown out wrath, terror, divine justice for mercy only; nor is it a God who shows to us only one face - the sweet lamb face and not the lion. Every time we approach God and relate to God (even now!) He is lamb and lion. The real, three-personed God puts us on the edge with HIm - the edge between just wrath and tender mercy - and empowers us to live with emboldened faith on life's edges as we begin to really fear Him.

There are two places in Scripture I've turned to most frequently when I worry, grow anxious, even fear. One is the Book of Romans, where I find a bedrock of truth regarding my firm standing with God secured by Christ through faith. The other is the Psalms where my fears find a voice and a God who speaks to them. It is in these two places where the Holy Spirit has helped me grow in simultaneously fearing and loving God. Let's look together first at Romans 8.

Romans 8. Romans 8:31: "What then shall we say to these things? If God is for us, who can be against us." That Scripture has given many of us great comfort and emboldened us to step out in faith - for a business meeting when a promotion or our very job was on the line, for trying something, getting up the nerve to pop a question of great import, saying "no" to people who've never heard you say that, for the courage just to get out of in bed, and to speak up for Jesus. Now the Apostle Paul did step out in faith to do some or most of the above (though it was likely 40 lashes minus 1 and not depression that made it hard to get out of bed). Yet none of these gave cause to Paul writing this courageous battle cry. Deliverance from the just condemnation and wrath of God was Paul's supreme reason for bold living. I say this for two reasons. Just a couple sentences later:

Who is to condemn? Christ Jesus is the one who died - more than that, who was raised - who is at the right hand of God, who indeed is interceding for us. Who shall separate us from the love of Christ? Shall tribulation, or distress, or persecution, or famine, or nakedness or danger, or sword?  (vv.34-35).

There was only One who can condemn and who still condemns but will no longer do so toward the lawbreaker who trusts in the Jesus - who bore the full weight of the condemnation on our behalf (what the Bible calls propitiation; see Romans 3:25; Hebrews 2:17; 1 John 4:10). "If God is for us, who can be against us" and the glorious section describing the Christian's essential invincibility to follow is the end of one long thought that began in v.1 of chapter 8. In fact v.1 of chapter 8 is the undisputed turning point of Romans that separates chapters 1-7 and 8-16. Paul has just described justification by faith in chapter 6, the ongoing presence of sin in chapter 7 and ends that chapter describing his ongoing struggle with sin. In a word, he expresses fear - fear that he'll never be done with sin. Then chapter 8, verse 1.

There is therefore no condemnation for those who are in Christ Jesus.

All other worldly fears dissipate because there is no longer fear of condemnation. The condemnation is still real because it fell on Jesus and because there is still condemnation to come for those in the world who do not trust Jesus to make them right with the Father...just no longer toward Paul. This liberating truth consumes Paul's thought. You can feel it escalating with every word in Romans 8! Out of awestruck gratitude & armed with every-moment access to a God of both merciful & terrible power, he risks all manner of potential harm for the glory of Jesus. Potential harm like tribulation, distress, persecution, famine (ie. not eating for days), danger, sword... even nakedness. His earthly fears shrink or are "crowded out" now that this new Fear expands even as it consumes most every thought.

Paul can teeter on any earthly edge precisely because He has/is teetering on the edge - between merciful eternal life with God and holy, just, divine judgment (again, it's the same God) and yet remains supremely confident he will never topple into it. This thought has so consumed Paul's mind that any bold act with the potential to harm - things present, things to come, demons, rulers, and spiritual powers of the gnarly sort (Rom 8:38-39) - are mere child's play by comparison.

In Part 2 (here), l share about Psalm 130, speak to how the fear of God transforms us, & finally explain the spider/snake/ledge/$1 bank balance...

Email ThisBlogThis!Share to TwitterShare to FacebookShare to Pinterest
Labels: Fear