Relating to my church when I don't have kids

Katie and I recently returned from an amazing vacation during which, for the first time in seven years, we were able to leave our kids behind. One of the nights we were away a single friend in our church body, who is very precious to us, was gracious enough to watch our children. In some ways, it might have been easier to have our boys stay "with a friend" that night - a typical nuclear family. But three factors opened the door: (a) Intentionally broadening our horizons (and conversations and things in common) to befriend our brothers and sisters free of children; (b) That person intentionally broadening their horizons to befriend a family with children. Katie, myself, and our boys were immensely blessed by our friend taking two nights (one to orient herself with their schools and their routines) to serve our family;  (c) Jesus Himself, through whom such possibilities of unlikely friendships become possible (see Ephesians 2:11-22). And so we reached out and asked a favor which she could meet and did...

As the years go by participating as a significant member of one's church and you are single without children or married without children, I recognize there exists a distinct possibility of feeling alienated or, at least, just that little amount of distance from those with children - enough to hinder friendship beyond the occasional handshake, hello, and hug. 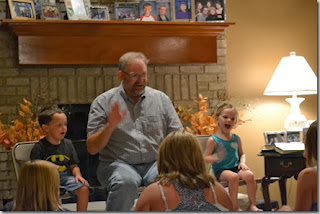 I've pasted below (was having problems with the url link) a wonderful testimony by a woman named Erin Lane - who is both a significant member of her local church and who has chosen to be married without children. I think she gets somewhere near the heart of the right reasons to choose life without children or, if unable to have children or single, some ideas to connect and be a blessing without children. Both those with and without children might profit from her story...

I am a young Christian women who doesn’t have children. I suppose the more interesting thing to folks is that I am a married woman with no plans on having future children of my own. I have ventured so far as to call this choice not just a lifestyle preference but a sacrifice, and one that serves the common good.

The common good is a concept that is as illusory as it is necessary. I understand what it means and am able to give voice to it on a larger scale only in as much as I can witness it playing out locally. I could spout arguments as others have about how our remaining childless may be good for this reason or that, but the best argument I can give for our choice is that it’s good for my neighbor. This I’ve seen with my own two eyes. I’ve heard it with perked ears.

We were hiking along a leaf-littered path, making our way up to the hermitage. I was on the heels of our pack leaders, two women who looked to be in their early forties. They chatted easily with one another, and I eavesdropped behind them. This, I determined, was less awkward than side winding around them and forging a path to the top of the mountain alone. We were after all on a church women’s retreat. “Community time” was part of the point.

It didn’t matter that they were taking about their kids, and I had none.

The theme of our retreat was celebration. The context was the Sabbath. Jennifer, our speaker for the weekend, told us of her time living in Jerusalem as a Christian single woman and how the city became a ghost town on Friday afternoons as people scurried home to prepare for their weekly day of rest. Sabbath wasn’t just a day of self-care, as it is sometimes practiced today in the West. It was about a community resting in rhythm. Singles and marrieds came together to eat, drink, and bless each other as one family.

“You can join us, you know,” the one in the running jacket said looking back at me. “But you might be bored.”

I laughed, awkwardly, and propelled my pace. “I don’t mind hearing about your kids.” Women are always apologizing to me for talking about their kids. They want to assure me that they’re not “that kind of woman.” I want to assure them that I think motherhood is a vocation to mull over just as much as mine is as a writer.

The other woman with a fleece tied around her waist caught me up. “We were just saying how there’s no way we could take a Sabbath with small children at home.”

Running woman continued. “I can give Dan time off from the kids to relax, but that means I’m taking them to the park or dreaming up an art project or just supervising free play. And then we switch, and I go for a run or grab a glass of wine but there’s no way we can really rest together.”

She tilted her face up to the hills, as if she were talking to herself now. “Those young women talk like it’s easy to rest. But the weekend isn’t restful.”

I strained my neck further so that it stuck out ever so slightly between them. “That’s where I come in.” Even as the words came out of my mouth, it sounded like a strange thing to say to these strange women I had just met. I had only been going to this church a little over a year but, still, I said, “That’s where a woman without children comes in.”

Without kids of our own, we practice the ministry of availability. When the sign-up sheet at church goes around for our night of ministry to the homeless, my husband and I always take the slot no one wants – the overnight guests. We are the ones with back’s strong enough to sleep on couches in the church parlor but old enough to handle a crisis together between either male or female guests. We don’t have to arrange a sitter for the dog we leave at home, and we can catch up on sleep in the quiet of our house come morning.

Without kids of our own, we practice the ministry of flexibility. It is that season of life when many of our female friends either have a belly full of baby or breasts full of milk. Young ones with new names are popping up down the block and across town at rates we’ve never before witnessed. We are learning there are feeding schedules and sleeping schedules and nary a moment for the happy hours and dinner parties of yesteryear. Fine, we say. Let us come to you. Not doing dairy because Malificent has reflux? We’ll thicken our broth with flour. Not sure when Alastair will wake up from his nap? We’re just watching Nashville, so text us when you’re ready. We have time. We’re not going anywhere.

And finally, without kids of our own, we practice the ministry of hospitality. We welcome the stranger in other people’s children. “I don’t want to staff the nursery during worship,” a young mom once lamented to me. “I’m always at the nursery.” Just because I don’t have kids, doesn’t mean I don’t like them—or understand the gifts that they are.

We’ve gotten some flack for our decision to remain childless that’s hard to understand. People argue it’s not natural. That it’s selfish. Or that it’s endangering the future of the human race. I don’t think the future of the human race has ever been served by all people making the same choice. It’s the diversity of our choices that allow for us to rest in rhythm as a church community. It’s when the music starts to play and we begin to tap our feet and after listening for a beat, we can say, “That’s where I come in.”
Posted by Pastor O at 10:09 AM