I am a ridiculously nostalgic person in general but especially when it comes to Christmas. My Christmas Playlist remains defiantly entrenched on my iPod all year round - even though it takes up far too much space (but what do you take off? Elvis' "Blue Christmas"? or "Mele Kalikimaka - Hawaiian Christmas"?! I don't think so!!). But I do like my Christmas traditions truthful. With the help of a couple books & the interwebs (snopes.com in particular), I found out some interesting and, sadly, disturbing revelations about Christmas.

Claim: December 25th is Jesus' birthday
Conclusion: Doubtful.
Further info: The Biblical Account of Jesus' birth does not give an exact date for the event; however it likely occurs in the Spring rather than in the Winter. Luke informs us that shepherds were "out in the field, keeping watch over their flocks by night" (Luke 2:8). Shepherds guarded their flocks day and night only during lambing time, in the spring. In the Winter, the animals were kept in corrals at night, unwatched. Celebrating the Nativity was first suggested in the 4th century A.D. During this time, the early church fathers were taking Roman ideas, symbols, and holidays and replacing them with Christian significance - it was another way to help people who had trusted Jesus as their Savior to move from their old ways of life to new ones. On December 25, the date of the Winter Solstices, Romans celebrated Natalis Solis Invicti, "Birthday of the Invincible Sun God," Mithras. This would be the date the church picked. One church father wrote: "We hold this day holy, not like the pagans because of the birth of the sun, but because of him who made it."  The apostle Paul would warn Christians not to make particular days holy lest we overemphasize a particular day rather than on the Lordship of Jesus (see Colossians  2:16-17). Nevertheless, celebrating the birth of Christ can serve as an opportunity to utilize a particular day in focusing on the wonderous mystery of the incarnation - God becoming flesh - though it doesn't matter on which day this occurs.

Claim: The modern image of Santa was created by the Coca-Cola Company
Conclusion: Myth 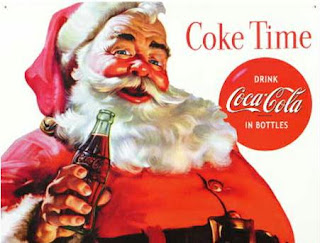 Further info: The idea here is that Santa's costume was changed to Red & White to reflect the corporate colors of Coke Brand. It's not true. Coca-Cola was looking for ways to boost sales during the Winter months as this was not a popular time for cold, soft drinks. And they did turn to illustrator Haddon Sundblom, who created a series of memorable drawings that made a direct correlation between a larger-than-life, red-and-white donned Santa Claus and Coca-Cola (as seen in adjacent picture). However, this modern version was not created by Coca-Cola. Sundblom's illustrations were based on what had already become the standard version of Santa as demonstrated in a New York Times article published in 1927, four years before the appearance of Sundbloms's first Coca-Cola Santa Ad. The article states:


A standardized Santa Claus appears to New York Children. Height, weight, and stature are almost exactly standardized, as are the red garments, the hood and the white whiskers. The pack full of toys, ruddy cheeks and nose, bushy eyebrows and a jolly, paunchy effect are also inevitable parts of the requisite make-up.

To further stress this point, below are some illustrations of Santa from 1906, 1908, and 1925 respectively: 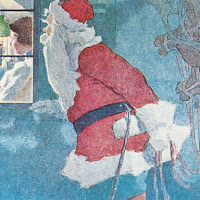 So while I love a good ole-fashioned corporate conspiracy as much the next bloke, we do not get one here.


Claim: "Xmas" is a disrespectful abbreviation of "Christmas."
Conclusion: Myth 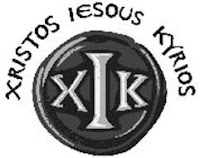 Further info: The idea is that people, at the least, looked for a way to abbreviate the spelling of Christmas and, at worst, secular society pushed this abbreviation to "take the CHRIST out of CHRISTmas." In actuality, this usage of Xmas dates back quite far and involves the Greek language in which the New Testament is written. The first letter in the Greek word for Christ is "chi" and the Greek letter "chi" is represented by a symbol quite similar to the letter "X" in the Roman alphabet. So "Xmas" was really utilized as a way of shortening the name of Christ, not X-ing out His name.

Claim: The Suicide rate increases significantly during the Holiday Season.
Conclusion: Myth
Further info: Sorry, I don't mean to end on a downer. But can you tell me you've never heard this one before?! And the claim is all the more persuasive when one considers its logic. Christmas and New Years are occasions in which many experience profound joy with family & friends can only serve to accentuate, in others, pain and isolation associated with loneliness. And, yet, this too appears to be a myth as pointed out by the Mayo Clinic in an article originally printed in The Des Moines Register (1995):


Suicide is not linked to the holidays, at least not in Minnesota's Olmstead County, where the Mayo Clinic is located, according to Mayo Clini researchers. A study of all reported suicides in Olmstead County during a 35-year period did not find an excess number of suicides just before, during, or after Thanksgiving, Christmas, New Year's...holidays. Nor did researchers find a higher suicide rate on birthdays or three days before or after birthddays. However, their work, concluded in 1985, did affirm other studies showing that suicides are most numerous early in the week and least common on weekends.

I should note that there are other studies arriving at remarkably similar conclusions but I'm too lazy right now to quote them. Look it up - heck, you might discover yet another Christmas myth! (If so, please post below).

Email ThisBlogThis!Share to TwitterShare to FacebookShare to Pinterest
Labels: Christmas